Kyle and Liz Strohman met through swimming and now they will be the Marion High School Swim coaches together. Kyle, the Executive Director at the Grant County Family YMCA will coach the boys and Liz, a speech and language pathologist for Marion Community Schools will coach the girls.

Marion Athletic Director Steve Moritz made the announcement on Wednesday afternoon to the boys and girls swim teams. Moritz said “its been a long search to fill these positions because we wanted to get the best possible coaches and we have done that by selecting the Strohmans.” Moritz also added that he is expecting the Marion High School Swim program to rise to great heights and to produce excellence for years to come.

Kyle learned to swim at an early age and has loved it ever since. During high school, at Maine West High in Des Plains Illinois, he took a lifeguarding class and that connected him to the swim team.  Kyle struggled at first but his coach kept encouraging him and by the end of his high school career he was swimming at state-level times and even held the pool record. After participating with the Eastern Illinois University swim team in college, he began his professional life working for the YMCA as an Aquatics Director. After several coaching opportunities there, Kyle began coaching the Elmhurst Tsunami at the YMCA of Metropolitan Chicago, that is where he met his wife Liz.

Liz was raised in the suburbs of Chicago and began swimming competitively at age 11. She swam all four years in high school and held a school record, (she held the record longer than Kyle she adds).  During college Liz was a head coach for the Tsunami swim team and together with Kyle, coached kids from ages 6-18.

Swimming has been and still is a very important part of the Strohmans life. The couple is very excited about the opportunity to instill their passion into the Marion High School swim program. “My goal has always been to help others find the same passion for swimming and to help make some life long memories!” Liz said. Kyle added, “Swimming is an amazing sport. If you put in the work, you will see the results. My coaching philosophy is simple: YOU, THE WATER, THE CLOCK.”

The Strohmans have two young boys, Connor and Carson, who are both students at Kendall Elementary School. 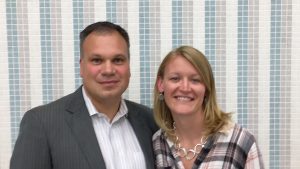