What could have been a devastating blow for Zaimar Burnett actually might have been a blessing in disguise.

The Marion sprinter was disqualified for a false start in the 100-meter finals and missed out on a return trip to the IHSAA boys’ track and field state finals in the event. Burnett still had one more chance in the 200, where the sophomore punched his ticket with a runner-up finish.

“I’m surprised I even made it after that breakdown that I had at regionals,” Burnett said Thursday afternoon. “I didn’t think I’d have it in me for when the 200-meter final came.

“When (officials) called the false start that was like God telling me that I’m good at the 200, too, so give it a shot,” he added.

Burnett is the only Giants representative in the 116th state meet today at the Robert C. Haugh Track & Field Complex on the Indiana University campus in Bloomington and returns an older and wiser sprinter. His experience last year should help optimize his performance and improve on his 15th seed time of 22.30 seconds.

“Yes sir, I was a little nervous my freshman year,” he said. “But this year I know what’s coming, so I’m ready. I’m not going to be nervous. I know those people are faster, some faster than me, but I’m going to give it all that I got.”

The 200 actually could be Burnett’s best event, although that is a farther distance than he prefers to run. Earlier this spring, Burnett turned in a 21.9-second clocking at the North Central Conference meet in Lafayette that was .3 seconds off Tony Sheron’s school record set more than 20 years ago and breezed to victory against a strong field.

“It was really a shocker when I ran a 21.9 in the 200-meter — I didn’t think I had it in me,” Burnett said. “Hopefully, I can end up beating the school record if I get in the final or even in the trials, like why not?”

Noah Malone of Hamilton Southeastern is the pre-meet top seed in the 200 at 21.48 seconds. The 200 trials are broken down in three sections and Burnett will run in the third heat, lane seven, at around 6 p.m. The finals are scheduled for 8:05 p.m.

Marion coach Nate Larson said Burnett can’t afford to hold anything back in his heat if he has any intention of advancing to the finals. The top two finishers automatically qualify along with the next three best times.

“Lane seven is a good spot for him on that track,” Larson continued. “The curve won’t be as tight and that will be good. We’re happy with where he’s at and he knows what he has to do.”

Burnett said he has spent the most time in practice this week negotiating the two curves in the race and position himself for the closing kick.

“I’ve been working on my curve acceleration and getting that right,” he said. “I have to balance it out and know where to kick it in at coming off the curve so I can finish stronger.”

Burnett’s first experience at the state finals was a 22nd place finish in the 100, and he was the only freshman in the event. Larson said Burnett’s previous experience should be helpful the second time around.

“For him to be a sophomore and this is his second time down there is a great advantage to him,” Larson said. “Going in last year he was like a deer caught in the headlights and this year he has a much more sophisticated demeanor to him. He knows what he needs to do and knows what to expect, and that’s the best part of it.”

While Burnett is striving for a high finish in the 200, he’s secure in the knowledge that he still has two years of high school remaining and he should continue to improve with more focused training.

“Next year I’m going to come in really different,” Burnett added. “I’m working on getting faster based around my natural speed and I will and push myself harder and give it my all and then hit the weight room a little bit so I can get my legs stronger. You might not even recognize me.” 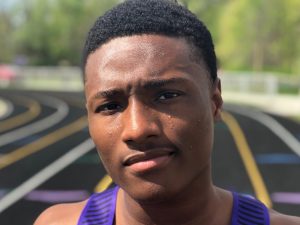