🎾Former Marion Giant tennis star Prasad Krishnamurthy will be inducted into the Marion High School Tennis Hall of Fame before the boys tennis match vs Madison-Grant today at the Bill Beekman Tennis Courts.

Krishnamurthy played four years for the Giants from 1989-1992 and was a member of the 1991 state championship team. He compiled a 73-5 varsity record. During the ’91 state tournament run, Krishnamurthy went undefeated at #2 singles and won the third match in the 3-2 state championship victory over Carmel. He was named Third Team All-State, a well-deserved honor since only seven players were named to each of the three All-State teams.

Following his high school career, Krishnamurthy played collegiate tennis at the University of Chicago. He and his family now reside in California. #GFND #TENNIS 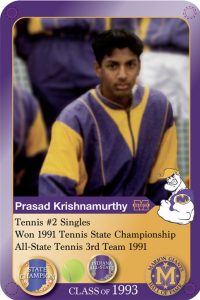