🏀 In 1926, the Marion Giants won their first state basketball championship under the leadership of star player, Charles “Stretch” Murphy. Because of his giant stature, he was nicknamed “Stretch” and Marion became forever-known as the Giants!
On behalf of the Marion High School students and staff who voted on the name given to our Giant mascot and in honor of Charles “Stretch” Murphy, we would like to introduce to you….Murphy the Muscle Man Giant aka “Stretch” #GFND 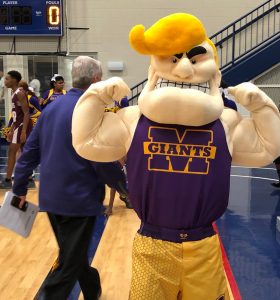