The Marion Giant Boys Basketball team is scheduled to play the Huntington North Vikings at the Bill Green Athletic Arena on Saturday, February 20, 2021 as they begin a home and home series for the next four years.  Marion High School Athletic Director Steve Moritz stated that he has been wanting to get Huntington North back on our boys basketball schedule since he became the AD in 2018. Moritz also added, “We’ve had a great tradition of playing the Vikings over the years and this will be a great game for our boys basketball team as well as an exciting series for our fans.”

The Giants and the Vikings last played in the regular season in Huntington on February 12, 2015 with the Giants winning 73-58. The last regular season meeting between the two schools at the Bill Green Athletic Arena was on February 13, 2014 as the Giants battled to a 101-92 victory in overtime. James Blackmon Jr led all scorers with 48 points while Vijay Blackmon added 25 points for the Giants. Marion has a 78-36 record vs Huntington North including a 16-3 record in 19 games in the IHSAA Boys Basketball State tournament. The Giants have played the Vikings 15 times in the Regional and many fans may recall the 1986 Regional Championship game when Huntington North nearly knocked off the Dream Team at the Bill Green Athletic Arena. The Vikings led the Giants 40-39 after three quarters and following a tightly contested fourth quarter, Kyle Persinger knocked down two free throws in the final seconds to seal the 57-54 victory as Marion continued their Purple Reign. 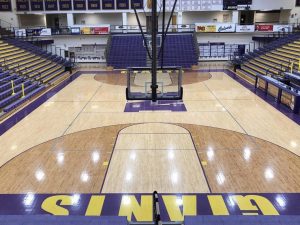