Bill Green Arena at Marion High School is one of the largest athletic gymnasiums in the country. 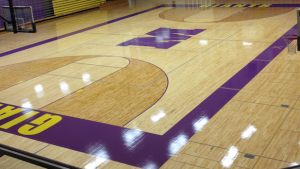 With seating capacity of 7,500, Bill Green Arena is well-suited for hosting a variety of events, including IHSAA basketball state tournament games and other basketball tournaments, volleyball tournaments and games, and of course home games for Marion Giants basketball and volleyball, along with various school and community events including Marion High School graduation ceremonies, a public Veterans Day ceremony, the annual Marion Community Schools Kindness Rally, and more.

The arena is named after Indiana Basketball Hall of Fame Coach Bill Green, who claimed five of his six IHSAA boys basketball state championships with the Marion Giants. He and the Giants took home back-to-back titles in 1975 and 1976, and then went one better a decade later, earning three titles in a row in 1985, 1986, and 1987. The 1985 team went undefeated on their way to the state championship.

He coached four Mr. Basketballs, including three Giants: Dave Colescott in 1976, and Jay Edwards and Lyndon Jones in 1987. (The fourth was George McGinnis from Indianapolis Washington High School in 1969, when Green claimed his first state title.)

Marion Community Schools named the MHS arena in his honor in 1996, and we are proud to claim Bill Green as a Giant, now and forever.